When I was in the seventh grade I got “lost” in the American Museum of Natural History while on a field trip. I got distracted in the Hall of Gems and Minerals and next thing I knew my group was gone. Following the directions drilled into us prior to departing from our middle school cafeteria that morning, I saw my English teacher with her group of students entering the hall and wandered over to her to announce the obvious, “I’m not where I’m supposed to be.” I was quickly reunited with the correct group and the day passed without other incident.

This memory has to be similar to memories held by students all over the tri-state area who have made the trek into the museum’s halls. Places like the American Museum of Natural History, or even The DaVinci Science Center where I would find myself interning nearly a decade after my adventure in the Hall of Gems and Minerals are special to me because they hold such great memories of exploring science as a kid, and helping kids explore science as an adult. I’ve always looked at science museums or science centers from that kid-centric lens. But these places have a lot more to offer, particularly for adults and I think one way science museums and centers can reach adults is through social media.

I’ve noticed this particularly since I started following the American Museum of Natural History on Twitter. Social media presents an enormous opportunity to connect with different types of people, and I feel like the American Museum of Natural History in particular is reaching a wide audience and making the most of having a social media presence on a platform like twitter. This isn’t just marketing to soccer moms and elementary school teachers, not with over 91,000 followers. I mean I’m neither of those things and they’ve got my attention. I wanted to share a few things that I’ve noticed about the @AMNH‘s twitter stream that make me think whoever is behind the keyboard over there gets it. 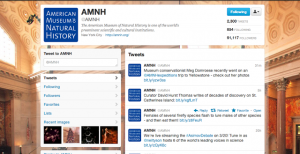 A screenshot of the @AMNH twitter page. I love their background!

1. Offering the why, not just the what – Any organization can operate a twitter account and fill it with plugs for their programs. What an organization does is important, but why they do it is more important. The why is what is going to keep people coming back long after that single exhibit they were originally interested in has moved on. While the AMNH account certainly tweets about reserving tickets to special exhibits, the majority of the tweets offer the why. There is actual information to be had here, like this piece on archaeology on St. Catharines Island. Is it promoting the museum? Sure the post’s writer David Hurst Thomas is the curator of North American Archaelogy in the Museum’s Division of Anthropology. But is it offering information you wouldn’t otherwise have? Sure. It is also providing depth to a topic that perhaps wouldn’t have drawn many people to the museum, I mean it’s hard to compete with the blue whale. It gives you a sense of who the people are who work for the AMNH. Which in this case, I think could turn a one time visitor into that person who comes back again and again.

2. Tweeting about other things – Chicago’s Brookfield Zoo has a new baby aardvark, and the Google Science Fair is currently accepting entries. These two things have little to do with one another aside from the fact that I learned about both from the @AMNH twitter account. Tweeting about things other than yourself tells me that one there is a real person behind the account, and two that person is interested in the science community not just getting people through the doors. I like that. It makes me trust not just the information in the twitter stream, but the organization itself.

3. Variety – Even when just dealing with tweets regarding the museum’s own content, there is a tremendous amount of variety in the @AMNH twitter stream. There are picture galleries, videos that explain different of topics, podcasts, hashtaged tweets about lectures or talks, and replies to individual twitter users. There is information about the people who work at or are involved in the museum when they are covered in the media. It all adds up to creating a feeling that this is about people. In terms of marketing, I think this strategy really works because it highlights all the people and topics that the museum is involved in, which makes it seem personal and approachable rather than simply like a box office.

There are plenty of other examples I could give about how a science museum could use social media, or even about what I’ve observed the American Museum of Natural History doing. They are clearly involved in a lot and have embraced social media and the interwebs. But for now, I encourage you to check them on Twitter for yourself. Whether you have kids or are a kid at heart who still gets butterflies entering the hall of African Mammals, a person who just has an interest in science and related topics or cool stuff, or are looking for an example of how to run a professional twitter stream I think there will be value in it for you. The @AMNH is #doingitright and might be worth the follow.