The Aquarium at night, courtesy of my cell phone.

Last night I posed a question to a few sciobeantown folks asking what was their “gateway science” – the topic that got them interested in science in general, the thing that hooked them. It seemed to me that the most common answers were either space or had something to do with animals, whether on land or at sea. This got me thinking about how if animals are the gateway, then zoos and aquariums are really the gatekeepers – the ones with the ability to open up a whole world of science.

This is a fairly fitting observation, since sciobeantown had just left the New England Aquarium when this conversation took place. I quite unabashedly love the aquarium, and its affiliated IMAX theater; it is where I spent my 25th birthday, because I am a grown up. The reason sciobeantown decided to take it to the Aquarium for our October event was because we wanted to give our group a little taste of ScioOceans, a conference going on in Miami geared toward communicating online about, what else, ocean science.

The Aquarium recently reopened several exhibits after being under construction (the penguins are back!) Additionally, they moved their public lectures out of their classroom space and into the IMAX theater – because power points are more acceptable when they are epic IMAX power points. We attended their most popular event of the year the John Carlson Lecture presented by MIT’s Lorenz Center. The topic for this talk was Sea Ice, Climate and Observational Mathematics and was given by John Wettlaufer a professor at Yale and Oxford. 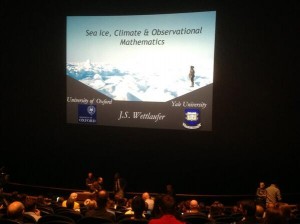 Lectures are so much better in IMAX!

I was fairly impressed by the turn out, it seemed to me that there was a real range of people, from students to retirees who seemed interested and engaged. Like all things, the talk had some positive and negative things. I loved that Wettlaufer took the time to explain what it means to be a scientist, and how science is so many different things all adding their own value. I also loved that he addressed uncertainty and spoke a bit about the perception of science. I felt like he went into a little too much detail about his research itself – by all means, show us what you do, but the screen of equations at a public talk was a little much for me.

Overall I thought it was a great experience, and I’m glad we were able to attend and bring our livetweeting skills. I’ve put together a storify of our tweets in case you’d like to know more about exactly what was covered in the talk. Special thanks to the New England Aquarium for having us, I’m looking forward to coming back to check out the new exhibits! Also, if you are interested you can follow the Aquarium on twitter @neaq and follow along with @ScioOceans #ScioOceans.

2 thoughts on “Sciobeantown At the New England Aquarium”