Hi everyone! I’m a little late with the December scientist of the month, because we did things a little differently this time. Normally, I ask a scientist who volunteers via Twitter a couple of questions, and my buddies in Mrs. Podolak’s first grade class will go over the interview, talk about it, and come up with their questions. They pose the questions in the comments, and the scientist answers them directly. You can see examples from earlier this school year here.

While this is a fun and productive set-up, this month I was able to connect our scientist David Shiffman, directly with the class over Skype. So, rather than post an interview with David, I’m just going to tell you a little about who he is, his science outreach activities, and recap a few of the questions the students asked him.

David is a marine biologist studying sharks through the RJ Dunlap Marine Conservation Program at the University of Miami. From the lab’s website: “The mission of RJD is to advance ocean conservation and scientific literacy by conducting cutting edge scientific research and providing innovative and meaningful outreach opportunities for students through exhilarating hands-on research and virtual learning experiences in marine biology.” Essentially, their focus is ocean science, but the lab and its members are also concerned with conservation, technology, and education. 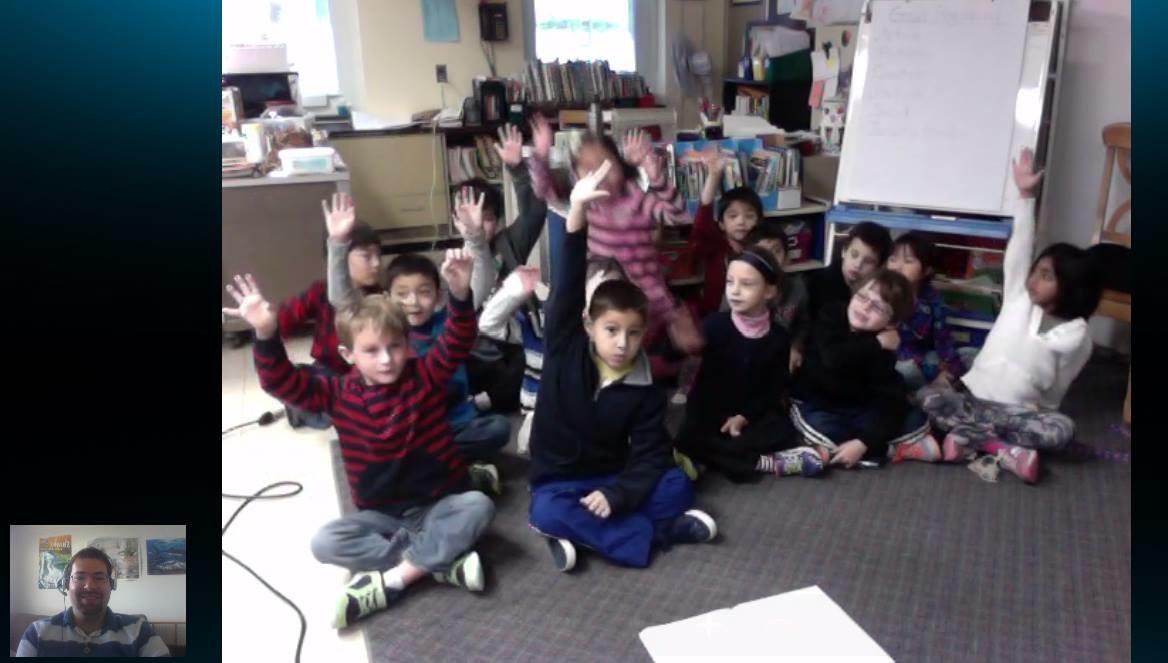 The last piece, education, is why I asked David to Skype with the class directly – he’s a pro at it! In addition to being a scientist, David is also a prolific science communicator; he blogs at Southern Fried Science, and is active on Twitter @whysharksmatter and Facebook. He provides a scientists’ point of view and expertise about shark conservation for mass media outlets like Slate, Wired and Scientific American. Additionally, he regularly works with students of varying ages, answering questions about sharks and ocean conservation. Including Mrs. Podolak’s class, David Skyped with an estimated 500 students in 2013!

So what kinds of questions did the first graders ask him about sharks?  I’ve listed a few below, with David’s answers.

These are just a few of the many questions that David answered for the students during their Skype interview. If you are interested in having David talk to your own students, or have a question for him you can contact him at whysharksmatter@gmail.com or on Twitter @whysharksmatter. Thank you, David for being our December Scientist of the Month!

Also: shameless plug for this segment, but if you’d like to be one of our Scientists of the Month, I’m currently accepting volunteers for 2014! I alternate months between men and women; you don’t have to be a PI or have your own lab, and I’m open to featuring any science field. You can contact me on Twitter @erinpodolak.