Science For Six-Year-Olds is a recurring segment on Science Decoded for Mrs. Podolak’s first grade class at Lincoln-Hubbard elementary school. This year the posts are inspired by #iamscience (also a Tumblr) and #realwomenofscience two hashtags on twitter that drove home for me the importance of teaching people who scientists are and what they really do.

Hello first graders, welcome to Science Decoded! I am so excited to be writing posts just for you this school year. We are going to have a lot of fun blogging together, because we are going to have a special year-long spotlight on who scientists are and what they do. We’ll have our first Scientist of the Month in October, but before we do I first want to find out what you know about scientists.

The reason I wanted to do this segment for you is because scientists aren’t any one thing. Yes, they are all bound together by the fact that they very systematically analyze information to learn new things. But scientists are a very diverse group – they are lots of different people, with many different interests and backgrounds. Scientists also study all kinds of different things. A scientist can study plants, animals, cells, chemicals, energy, the way things move, medicine, space and how to build or put things together in addition to a lot of other stuff! 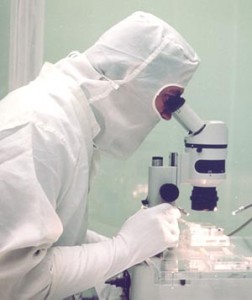 Scientists are important to all of us, because they work hard to try to figure out things about the world that we don’t know. There used to be a time when people didn’t know that all living things are made of cells, but today we know so much more about them and have learned that understanding what goes on in cells is critically important. What are some of the things that you know about that scientists have discovered? Do you know the names of any scientists?

I hope you have had a good time talking about who scientists are and what they do. I’m really looking forward to introducing you to some great scientists and helping you learn more about what it means to be a scientist. Our first scientist is a paleontologist and geochemist (don’t worry, we’ll learn what that means) but in the meantime if you have any questions for me, feel free to leave them in the comments.

I’m not a scientist, I’m a science writer. I went to school to learn how to research, report on, and write stories about scientists and what they discover. But, even though I’m not a scientist, helping share scientists’ ideas is my specialty. Hopefully, I’ll be able to do that with these posts!

2 thoughts on “Science For Six-Year-Olds: Introducing The Scientist of the Month Segment”