Last week I read Sebastian Junger’s War. I think that because of my close proximity to September 11th, I feel pretty strongly about the wars in Iraq and Afghanistan, yet reading this book made me feel like I don’t actually know a damn thing about them. Even from Junger’s point of view as an embedded journalist, I feel like I learned a lot about the war. 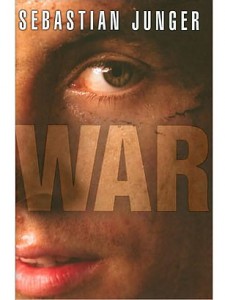 When I was at Lehigh I met a veteran named Matt that I though was amazing for his willingness to talk candidly about his tours in Iraq. He was from New York and joined after September 11th, he told me he joined because you can’t let something like that happen in your backyard, you have to stand up and fight back. Talking to him was my first real glimpse of what war is like.

We talked about what it was like to go from being in a war zone to suddenly being transplanted onto a college campus, especially one like Lehigh. In the land of polo shirts and flip flops all of his tattoos and his combat boots certainly didn’t fit in. He got called back to Iraq in 2009, and I graduated and left Lehigh so I’ve lost track of him since, but I still really appreciate everything he was willing to share with me about his experience.

My memories of talking to Matt definitely shaped the way I viewed Junger’s reporting. From what I already knew about what Matt said being in the Army was like, I have to say I think that Junger did a great job of accurately relaying what he saw and experienced. I don’t doubt what Junger says happened during his visits to Afghanistan, he was able to paint scenes in a way that conveyed not only the action, but the emotion (or lack there of) of each situation.

War is a good read, and I recommend it for anyone who wants to get a glimpse of what Afghanistan is actually like. But, I also recommend talking to veterans themselves, no one else can tell their stories the way they can, not even Sebastian Junger.

Also for anyone interested, Junger did make a documentary about the unit that he embedded with (the same one in the book) called Restrepo. It won the 2010 Grand Jury prize for best documentary at the Sundance Film Festival.