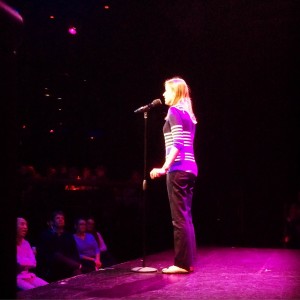 On stage at the Story Collider. Photo by Brian J. Abraham.

I have very limited experience being on stage. I’ve never been an “all eyes on me” type of person. I rarely, if ever, give talks or speeches for work, and, when it came to theater productions growing up, I was happier in the lighting booth and running around backstage. My on-stage experience amounts to one disastrous talent show where I was supposed to do a ballet routine, spun around once, burst into tears and stood on stage crying for the remaining three minutes of the song. Afterwards kind adults kept coming up to me telling me I was great, and, even at the age of six, I was the person that replied, “no I didn’t, weren’t you watching?!” My only other performance remains my third grade school play, which was called “Project Rescue: Save the Earth” and was about recycling. I played a raccoon. I had no lines.

Given this tremendous wealth of stage experience, I recently figured it would be a great idea to get up on stage in front of a theater full of strangers and tell them all about one of the most traumatic events in my life. Why not?

In the Fall of 2015, I volunteered to tell the story of how I diagnosed my own benign brain tumor at the Story Collider. I’ve been a huge fan of the Story Collider since I met the show’s co-founder Ben Lillie in 2013 and was introduced to the concept. The Story Collider is a live show where people get on stage and tell the audience a true story about science. With this as the founding concept,  the stories cover nearly everything. Each show consists of five storytellers who take the stage for about 10 minutes each. Sometimes the stories are funny, sometimes heartrendingly tragic, but they’re always in some way about how science impacted the teller’s life. The Story Collider also has a weekly podcast, where they publish one of the stories from the live shows.

As the dust was settling from the entire brain tumor episode (around the fall of 2014), I started thinking that eventually the saga would make a great Story Collider tale. I wasn’t particularly ready then to get on stage and open myself up in that way, but I knew that it was something that I wanted to do in the near future. I think there is a lot of power in taking control of your own story and telling it your own way. I also feel like my story can help people by sharing what I went through and maybe even helping someone avoid the same mistakes I made– that’s why I wrote about it after it happened and why I wanted to tell the story publicly.

It took until the summer of 2015 before I felt ready to take the stage, I had been feeling kind of stagnant in the science communication side of my life and thought that getting involved in Story Collider could be a good way to shake myself out of it. Ben connected me with the Boston show’s producers Ari Daniel and Christine Gentry, and together we decided that the story would be a good fit for the December show (there was a Fall show for the NASW conference that I was not brave enough to do.  Strangers are one thing; professional peers are another – hats off to the daring souls who took the stage during that show!)

As I started working out what I wanted to say, I realized that I would have to focus on just a subset of the brain tumor ordeal. There are a lot of different angles I could take, but I decided that the part I wanted to concentrate on was what came before– the two years from when I started to feel sick to when I was diagnosed. I chose this time period for a few reasons: while I was seeing doctors and talking to others about my health, I was really in it alone, so a lot of the story is about what I was thinking and feeling. I wanted to talk about the doctor who got it wrong and the one who got it right.  I wanted to talk about my regrets in those two years. Perhaps the most interesting thing about the entire episode is when I diagnosed myself correctly long before any medical providers did.

Brain tumors are rare, but my tumor was a vestibular schwannoma, which is really rare: 2,000 – 3,000 yearly U.S. cases. Among primary brain tumors (those that arise from the tissues in the brain) the majority are non-malignant (like mine) but with more than 100 distinct types of brain and central nervous system tumors it’s a very tiny pie, being carved up into 100 even smaller little sections. Hitting the bulls eye, and getting the diagnosis EXACTLY right, as a joke, my first time out of the gate is incredible. It’s not that I’m particularly smart or anything, I’m just an informed person who got lucky – but still – hell of a thing, right? 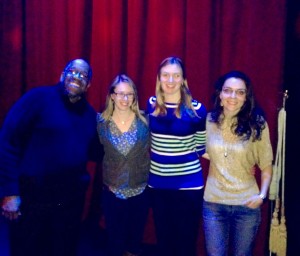 After the show with my amazing co-storytellers. Photo by Brian J. Abraham.

The topic that I was most nervous about covering was my doctors. I know there is a ton of snark out there about how doctors are well trained, and making a diagnosis isn’t as easy as just going to google, and too often patients come to their doctors with whacked out ideas about what they might have. I get that, and I respect medicine as a field, and I know that doctors go through a tremendous amount to get trained, certified, and practice. But doctors are still just people. Highly trained people, with incredibly specialized knowledge, but still, just people. People can make mistakes. People can be dismissive. People can be cruel, and cold. Doctors aren’t above any of this– no one is. But doctors hold their patients lives in their hands, and, when you’re counting on someone to have the expertise necessary to help you, and you trust that they do, being dismissed, when you’re right, is a terrible thing to experience.

I wanted to tell how the medical system failed me at points, but I didn’t want it to be mere doctor-bashing. Yes, I saw a doctor who missed what others with medical backgrounds have told me were textbook signs. But I also had an amazing doctor who understood the significance of my symptoms right away and advocated for me as her patient to get the best care. I also had an amazing surgical team that went above and beyond to take care of me. (I still feel that I owe my surgeon her vacation days back; yes, the hospital’s only specialist in my type of tumor left her vacation to come back and treat me.)  As with all things, there was good and bad. I wanted to make sure both the doctor who dismissed me, and the doctor who pushed me to get diagnosed properly appeared in my story. The choices made by these  two people and how they treated me as their patient drastically and permanently changed my life.

I’ll never know whether the surgeons could have used a different surgical approach that would have saved my hearing if only I had been diagnosed by that first doctor. By the time I knew what I was dealing with, the tumor was so large that, for my safety, a hearing-sparing option was out of the question. If only we had seen it sooner, would it have been small enough? I think it probably wouldn’t have, and I’d have lost my hearing either way, but I’ll never fully know. If my primary care doctor hadn’t been so adamant about getting me diagnosed immediately after she saw me, would I have become unable to move my face? That was a real possibility, and was the reason the surgeons opted to do the procedure right away. If these two doctors had made different decisions, how would my life be different now? I think about that a lot.

That’s the story about science that I wanted to tell at the Story Collider. It’s the story of how I struggled with myself to find the truth that I didn’t want to be real among all of these conflicting forces giving me different information. Dissecting what happened to me in this way is something that I had avoided doing for a long time, but writing my script felt like such a rewarding exercise. It was good to turn all of these things over in my mind, and I think forcing myself to tease out my feelings about the whole thing helped me to come to a more secure sense of resolution about what happened. Sharing the story with a live audience was just the icing on top.

The show was in December 2015, and I shared the stage with four other storytellers: Kaća Bradonjić, Kamau Hashim, Meg Rosenburg, and Abhishek Shah. It was an absolute pleasure to share this experience with them; their stories were all amazing. The theme of the show was “The Art of Losing,” which I thought fit all five stories together perfectly. It was a total rush to take the stage. I feel like my emotions and adrenaline were running so high I don’t really remember the experience. It was like time warping. I just stepped up to the microphone and started talking, and then it was over and people were clapping.

Here is the audio recording of my performance at the show:

Overall it was a great experience for me, and I hope that people enjoy listening to my story. If you aren’t familiar with the Story Collider, I encourage you to check it out. It remains one of my absolute favorite means of science communication. They have live shows in an expanding number of cities, and there is always the weekly podcast – so plenty of opportunities to hear true stories about science.