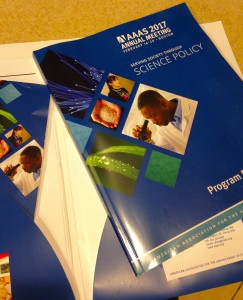 The program book for the 2017 AAAS conference. Photo by me.

This year, the American Association for the Advancement of Science (AAAS) held it’s annual conference in my neck of the woods (Boston) so I was able to take a few days away from the office to attend. In the realm of conferences that someone in my field might consider going to, AAAS always stands out because it isn’t strictly a communication conference, and it isn’t strictly a science conference – it’s definitely both, with a generous dose of science policy thrown in for good measure. For its range of content AAAS attracts a very eclectic group of attendees. Anecdotally, I think the conference caters a lot to young people, but there are plenty of mid-career and established people who attend as well.

This was my third AAAS conference, and I think the value of science communication is becoming more and more apparent because it has taken an increasingly important place in the conference line up. Thursday (February 16, 2017) the first day of sessions, I attended the communicating science seminar, which was a lineup of three different panel talks the topics of which were: “Who’s your audience?,” “Scientist motivations, support, and challenges for public engagement,” and “The online scientist: social media and public engagement.” I think all of these sessions were sculpted to appeal to scientists more than science writers but there was a lot to get out of them as a science writer.

A few of my key take aways or sound bites from the communicating science seminar are:

Overall Thursday brought a series of interesting conversations, with a great lineup of speakers who brought a nice array of points of view to the table. There were a lot of scientists in the room (they did an informal poll by show of hands) who self-identified as interested in doing more science communication, which I think is a great thing. This shows scientists have bought into the importance of outreach and are looking for avenues to explore. A lot of these lessons about effective engagement of audiences are applicable in my work too. For me, the most striking thing was that respect for the people you’re trying to reach is key.

On Friday (February 17, 2017) Naomi Oreskes gave a plenary talk called “The Scientist as Sentinel” that touched on a lot of the ideas that were mentioned during the communicating science seminars. Oreskes is the author of the book Merchants of Doubt about the scientific “experts” brought in to shape public opinion and policy on everything from smoking to climate change. It’s a wonderful book, and, though it certainly filled me with righteous indignation, I would encourage everyone to read it. Oreskes’ talk was about the role that scientists can (and should be encouraged) to take in standing up for their science and themselves. She started off by saying that often scientists want there to be a bright line between science and policy, and as such they tend to want to “let the facts speak for themselves” because speaking up publicly about science dulls that bright line.

Oreskes talked about how their is a continuum of ways scientists can approach defending their work ranging from completely hands-off, leaving it to others to communicate with the public, all the way to the activist ideal, suggesting policy and perhaps even demonstrating (or getting arrested) in defense of the work. She advocated that scientists could seek middle ground, as a “responsible scientist” model of outreach. 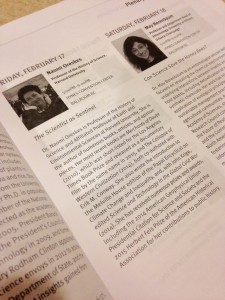 The description of Oreskes talk in the program. Photo by me.

Oreskes made the comment that [with regards to climate change] what is rational is to be alarmed, and what is irrational is to be complacent. Scientists, who bask in the identity of being rational, can therefore identify the value in speaking up. She brought up the idea that climate change denial is not about facts, because, if it were, the alignment between a person’s political affiliation and their beliefs about climate change wouldn’t be so strong. When arguments aren’t about facts, they can’t be refuted with simply more facts. When it comes to scientifically controversial issues, the argument is often the same, if we deal with [insert issue here] it will lead to bigger government, and thus constriction of our freedoms. It isn’t a scientific controversy at all, but a clash of political ideologies. Scientists aren’t going to get very far bringing climate data to an economic and political ideology battle.

Oreskes put our current landscape for scientists speaking up against the historical backdrop of the scientists who spoke out against the use of nuclear weapons. Often, these were scientists who were involved in their creation. Her argument was that those scientists never lost scientific credibility for the act of taking a stand. Their science is still regarded with respect by their peers and the public. The same can be true for scientists who take a stand today. One of her closing thoughts was that scientists who have become the target of personal attacks were not attacked because they spoke out in public, instead they became public figures because they were attacked for their work. Ignoring the situation will not help or insulate scientists from the need to defend important work.

For me, Oreskes talk was one of the highlights of the conference, and I’m glad I was able to attend.

Of the rest of the sessions that I attended over the course of the conference there are two topics that stood out to me as particularly important (and about which there were several sessions each). The first is CRISPR, and the ethics, policy, and scientific progress being made with regards to human gene editing. The second was fake news and the distortion of facts. Both of these seemed like trends with regards to what people are concerned about and interested in.

From the CRISPR sessions, one of the main ideas that I took away is that if (as is currently recommended by the National Academies) human gene editing is only urged for “serious” health problems we need to define what counts as serious, and determine who gets to make that decision. If we are urging against changes that could be considered “enhancements” we need to find the line between treatment and enhancement, and, again, decide who will make that decision. If we’re looking to our government to make these policy decisions, it’s important to remember that, due to the separation of church and state federal scientific agencies (such as the Food and Drug Administration) don’t have the mandate to take religious beliefs into account when making decisions, despite the often religious-based concerns held by the public.

From the fake news sessions, what I walked away with was a sense that while it is a problem, there is reason to hope because fake news has always existed. Media has always been fragmented, rather than monolithic, and there have always been issues that Americans did not debate civilly. Fake news used to be found most often in the fringe – radio, newsletters, and in face-to-face conversations. The internet has changed the accessibility and spread of fake news. But even “traditional” outlets like television have been responsible for the spread of false ideas, like the fact that a majority of Americans believe that Sarah Palin uttered the words “I can see Russia from my house” when really it was Tina Fey, pretending to be Palin on Saturday Night Live. From all of this it may seem like people don’t care about or respect science, but they do. If you didn’t value science, you wouldn’t want to have facts or data on your side. Perhaps there is a way to tap into that trust in science.

Overall it was a conference that was very applicable to our current science communication landscape, and that left me with plenty to think about with regards to how I can be most effective in my job moving forward.

Note: I did not individually call out many of the speakers in the sessions I attended (though I did link to some and all can be found in the AAAS 2017 program). This is because, by and large, what I’ve written here is my synthesis of what I heard, sometimes combining several speakers and mostly put into my own words. I did not want to put responsibility for my interpretation of information on someone else unless I felt confident that my notes could accurately quote them. I do want to be very clear that these are not original ideas of mine but my interpretation of what others shared.