It’s been a long time since I’ve shared thoughts about anything that I’ve read. Not that I’ve stopped reading of course, in the past year I’ve made my way through many non-fiction science books that I’ve enjoyed but haven’t written about. I was on a blogging hiatus, but now that I have free time courtesy of the things detailed in this post, I want to rebrand my book review series. I’m not sure book review is accurate to describe the type of posts I write.  While I share my opinions, I almost never write about books I didn’t enjoy and try to avoid negative comments. I do this because if I’m going to write a post I want it to be about something I’m excited about and enjoyed rather than something I disliked. Thus, I feel calling these posts What I’m Reading is better than Book Reviews. As always, if I’ve been asked to read a book by the author or publisher I’ll let you know, though nearly all the books I write about are chosen because they peaked my interest. Even with a new name, I hope people will still be encouraged to check out the books featured in this series.

When I’m reading non-fiction I gauge the success of the story by how quickly I finish reading it. Are the things on my to-do list falling by the wayside because I need to know what happens next? Am I so engaged that nearly 500 pages can be consumed within a few days, or are the pages trickling by as they lull me to sleep each night? Is the book so compelling that even the most technical details are devoured alongside the more narrative elements of the story? To cross the line from “I liked it” to “I loved it” a book needs to meet these criteria. I loved Toms River by Dan Fagin. 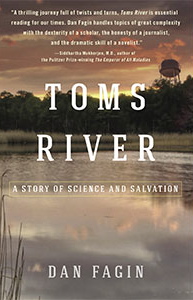 In addition to being the name of Fagin’s Pulitzer Prize winning book, Toms River is the name of a town in New Jersey. I grew up in New Jersey in the 1990s and 2000s – just young enough to know that Toms River had a stigma attached to it, but not old enough to read the papers or understand why. When I found out Fagin was writing a book about the New Jersey town and it’s epic pollution problem, I was intrigued and quite frankly a little shocked by how little I knew about the environmental disaster that had taken place in my own home state.

As far as states go, New Jersey doesn’t exactly have a glimmering reputation. Since it’s not enough to have to contend with pop culture stereotypes like Jersey Shore or the Sopranos, we also have our fair share of government corruption and industrial pollution. Yet I feel protective of the “Garden State” (when you think of the pollution problems, the jokes just write themselves don’t they?) Where I grew up, on the boarder of Union and Morris counties, was the very picture of the idyllic New York City suburb. It was hard to imagine the state had a pollution problem when surrounded by the manicured perfection of sprawling lawns, parks, and golf courses. Yet, even as a kid, while I don’t remember any specific media coverage I remember the negativity, the impression that Toms River had problems. Until I picked up Fagin’s book, that was really all I knew about it.

While the details of the environmental disaster that played out in Toms River over the course of 50 years may have eluded me growing up I was aware of New Jersey’s distinction as the state with most Superfund sites. On their website the Environmental Protection Agency describes Superfund sites as:

“An uncontrolled or abandoned place where hazardous waste is located, possibly affecting local ecosystems or people.”

The government started designating Superfund sites after the Love Canal case in which toxic chemicals located beneath homes and an elementary school in Nigara Falls, NY started causing health problems in 1978. Toms River made it onto the list in 1983 thanks to the Ciba-Geigy factory, a 1,400 acre site where the chemical company manufactured primarily dyes, but also resins and epoxy. The company dumped waste products from the manufacturing process contaminated with toxic chemicals on the factory property, into the nearby river, and into the Atlantic Ocean from the time the factory was established in the 1950s. Toms River is a beach community, and the toxic waste easily seeped through the porous sandy soil to contaminate the ground water in the area. The groundwater cleanup started in 1996, when I was eight which is why I missed out on the majority of the drama.

Fagin’s book starts out by getting into the history of dye manufacturing. It doesn’t really sound like a topic that would be captivating, but I was fascinated by the backstory behind major chemical companies and how dye became a big business. Tracing the various companies through their founding, expansions, closures, consolidations, and mergers with clarity is a difficult task, and Toms River does it skillfully. I was hooked from the very beginning and as the story developed from the discovery of the chemical compounds used in dye manufacturing through the events that led Ciba-Geigy to open their plant in Toms River I found myself more and more impressed at how sucked into the story I became.

There is a turning point in the middle of the book where the story starts to shift from explaining how the pollution got into the water in Toms River, to explaining the affects of that pollution on the town’s residents namely the rise of a pediatric cancer cluster. I may be slightly biased in how interesting I find cancer epidemiology since I do write about cancer research for a living but I feel like Toms River handles an incredibly complex science with a perfect amount of nuance and explanation. The book even gets into the nitty gritty of experimental design without making me want to skip ahead to just find out the results. The intricacies of the studies needed to prove an environmentally caused cancer cluster became the drama for a big section of the book.

Woven throughout the book are the stories of the people involved from the first dye discovery through the operation of the factory all the way to the legal battle that sprung up once the cancer cluster was discovered. Generally I’d call the human element the narrative aspect of the story, the thing that drives the story forward, but that doesn’t really feel appropriate in this case. The entire thing is a compelling narrative. Still, Fagin does a wonderful job of injecting the story with the personal experiences of the people who lived it. The book culminates with settlement of the legal case regarding the Toms River pollution, and the scientific findings from the studies undertaken to prove that the cancer cluster had an environmental cause. These parts of the story are explained through the impact they had on the families of children with cancer and thus resonate deeply.

I really loved Toms River from start to finish, and recommend it for anyone regardless of your background knowledge or interest in science or environmental issues. It is just a fascinating story, told extremely well.