I often write about stories or headlines and how it is obvious that the media just couldn’t resist. Well, in this instance I couldn’t resist. I’ve been putting off writing a new blog post for various reasons but when I saw the headline, “Depraved sex acts by penguins shocked polar explorer” I knew I had my next post. The story has everything: animals, behavior, history, science, and an obviously irresistible headline.

Science history is an area I have no training in, but it combines two subjects that I’ve always found interesting. If I’d had more time I probably would have added a history minor to my Bachelor’s because I took so many history classes as electives. I obviously have a love for all things science, so add history to that and my interest is definitely peaked. Especially after my history of the scientific book and journal class from last semester. 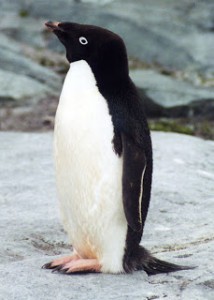 Prior to and following his involvement with the ill-fated Terra Nova Expedition, Levick was a leading expert in the study of penguins and was the first person to observe penguins for an entire breeding season. His observations of their sexual behavior were apparently quite scandalous. So much so that when Levick wrote a paper about his observations including what he dubbed “sexual coercion” “depravity” and even necrophilia (male penguins having sex with dead females), that portion of the paper was not included in the official publication. Instead, 100 copies were discreetly distributed to select scientists.

Douglas Russell, curator of eggs and nests at the British Natural History Museum, discovered one of the only two remaining copies of Levick’s lascivious penguin paper in the museum’s files. Russell and colleagues have published their interpretation of Levick’s findings in the journal Polar Record. The original paper and handwritten notes by Levick are now on display at the museum.

According to Russell, scientists in the early 1900’s didn’t understand the penguins’ behavior but now scientists have a better base of knowledge for understanding Levick’s original observations. For example, what he described as necrophilia isn’t actually necrophilia the way the behavior is understood in humans. When it occurs in penguins, scientists now believe male penguins are confusing dead females with live females due to specific body positioning. In the BBC’s article about it, Russell says he thinks researchers in Levick’s time often looked at penguins like little people, but their behavior needs to be understood in terms of their own species. They are birds, and need to be observed in that context.

I really like this story for several reasons. Of course, I enjoy being able to title this post with an inappropriate alliteration, but I also really love the historical significance. Levick is an interesting scientist for his ground breaking work with penguins, but also for his participation in the Terra Nova Expedition. I love that this is a story about animal behavior, an area that I’ve written about and been interested in for some time. I also love that this is about penguins, because who doesn’t like penguins? So there you have it, all the components of an irresistible blog post.