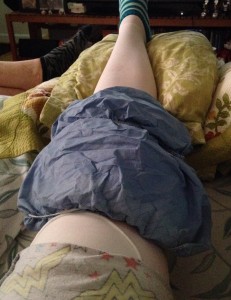 My left knee directly after surgery accompanied by ice packs.

In January 2014, I fell crossing the street. In my defense, it was a damp day that felt like it could either rain or snow, and the streets were already slick with moisture. I was hurrying to cross while I still had the light, and, right as I was in the middle of the road, my right foot shot out from under me. I had slipped on the white paint of the crosswalk, essentially doing an unintended split. My left leg was behind me, and I landed on it, putting all of my weight on my left knee and winding up in a sitting position. The fall hurt, in the way that most falls do. I was scraped and bruised (but mostly embarrassed). But I got myself up, and continued on my way to work, thinking little of it in the days and weeks afterwards.

This fall was one of the signs I missed. Looking backward, it has become clear why I fell. To be fair, at the time, I didn’t know that I was walking around with a benign brain tumor altering my system of balance. The bruises on my knee were low priority compared to diagnosing and addressing my other symptoms, hearing loss and vertigo. Everything in my life became centered on the symptoms of the tumor – symptoms that wouldn’t be diagnosed until two months later.

As badly as the tumor damaged my ability to balance, the surgery to remove it made it worse, albeit temporarily.  I needed physical therapy (vestibular rehab) to retrain my brain to balance, which helped me get back on my feet. While I was working on my balance, I noticed a nagging pain in my left knee. I shrugged it off as mere stiffness from having been inactive for so long while recovering. But it didn’t go away and hurt more as I became more active.  In the following months, I would start to think that this knee injury was like my brain tumor’s last “screw you”– the final parting shot.

Fed up with being sick, I got good at ignoring the discomfort.  I wanted so badly to feel like myself again and get back to my normal. The last thing I wanted was something else wrong with me that needed medical attention. So, even though I knew the pain in my knee wasn’t normal, I gritted my teeth and just dealt. It was nearly a year later before I realized  my knee pain had gotten much worse. While I can be ostrich-like with my head in the sand when it comes to my health, the knee pain of spring 2015 was something I could no longer ignore.

I started with my primary care provider, who recommended an orthopedic specialist. I had pain in several different parts of my left knee: in the front near the patella (knee cap), along the inside of the joint, and towards the back. This variety of pain sources made it a little more difficult to pinpoint the problem, but I agreed to start with some physical therapy to see if that could help. The PT did help some of the pain, especially along the inside of the knee, which was diagnosed as pes anserine bursitis. Basically, the fluid-filled pad cushioning the bones of my knee was inflamed and tender.  Even after the PT, there was still lingering pain in the knee, and it just didn’t feel right, so I asked the orthopedist for an MRI. 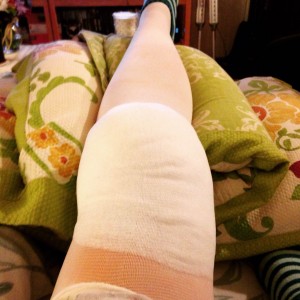 Knee all wrapped up in bandages a few days after the surgery.

The MRI showed a lateral tear in my meniscus. The meniscus is the rubbery cartilage disc that cushions the tibia (shin) from rubbing against the femur (thigh). Typically, meniscus tears are caused by forceful twisting of the knee– exactly what I did when crossing that street. Next to my tear was a bonus cyst, which was adding to the pain. The orthopedist and I concluded that, if physical therapy hadn’t helped enough, the only remaining option was surgery.

After what I’d been through with the brain tumor, I was hesitant to have another surgery. It was hard to be so dependent on other people after a procedure, and waking up from anesthesia was a horrible experience. Rationally, I knew the knee surgery wouldn’t be the same as the brain tumor surgery, but I still couldn’t get motivated to actually schedule it. Pain won out though, and I had to accept that I needed the surgery if things were going to get better. At 27, it didn’t make a lot of sense to resign myself to living with constant pain. I struggled going up and down stairs, couldn’t walk far distances, and running was completely out of the question.

I decided that the beginning of March made the most sense for when to have the surgery. It’s when Boston usually starts to thaw, so I would not likely have to contend with much snow. I also timed it between travel and social requirements, so I would have time to recover. My parents were able to take time off of work to come up to Boston to stay with me, which was particularly helpful; I’m pretty sure I would have started clawing at the walls if left alone during recovery. Of course the timing wasn’t great for work – but it’s never completely convenient to take two weeks off from your daily activities. There was a lot of emotion built into getting my knee fixed because of what I’d been through when I injured it, but I knew it was the right choice (and it was really the only option for feeling better).

The surgery itself was on March 1st, and went as smoothly as possible. I could have had it at a hospital in Boston, but it made more sense to go outside the city: it left the hospital for emergency cases, which is what they’re designed for, and moved my outpatient procedure to a facility that it was designed for. I suspected that the outpatient facility would be calmer and make for a more focused experience, which it was. I also didn’t want to be in the very same PACU that I’d had my brain tumor surgery experience in; I felt like that place would bring up memories and emotions that I didn’t want to relive. 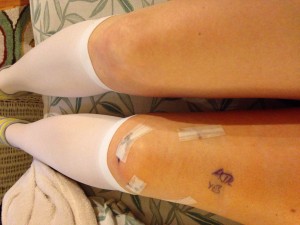 Knee without the bandages, about a week after the surgery. You can see my surgeon’s initials where he signed my knee before the procedure.

It was all over in a couple of hours. I didn’t have nearly as much trouble waking up in the PACU this time, although I did get some momentary vertigo as I was coming to, which was scary given that I was still pretty out of it. Mercifully, it passed quickly and things went back to normal. Within a couple hours, I was dressed and able to get in the car to go home. Once home, it was couch and Netflix. I was only on the crutches they gave me for two days, and, after that, I started walking around on my own.

I’m going to need physical therapy, but I can already tell that the pain from the torn meniscus is gone. Not that there’s no pain–recovery can be tough and there is still a little of the bursitis that I had before–but I can tell the nagging, limiting pain is gone. After compensating for one weak knee with the other strong leg, I now have to regain strength and steadiness and equivalence between both.  Having spent most of my life with no health issues, and now having undergone two surgeries in two years, I definitely have a different perspective on what not feeling well means. I am optimistic that, finally, I’ll be able to feel better.  I will get back the way I was before the brain tumor and balance problems, before the knee pain. It’s an opportunity that I know many people who endure similar illnesses and injuries don’t get – the chance to go back to full health.