Last year while taking a class on human and animal relationships I learned about Alex the African grey parrot (Psittacus erithacus). At the time, Alex had already passed away (he died in 2007) but he was still renowned for his performance in cognition experiments conducted by psychologist Irene Pepperburg of Harvard University. I was thinking a lot about animal cognition back then, and I was impressed by what Alex did so I wrote a short post about his skills. We humans like to think of ourselves as elite, but too often we underestimate the abilities of other species. 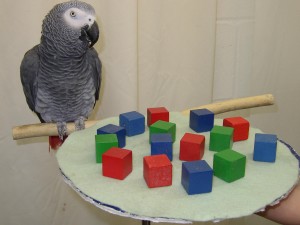 The reason I bring up Alex is because I recently read this Nature News article about a new paper published by Pepperburg in the journal Animal Cognition (behind a pay wall, sorry) describing her last experiments with Alex on addition. The newly published paper describes Alex’s ability to successfully add together arabic numerals (the ones we use) up to eight. He was also able to come up with the total number of objects separated under three different cups. The experiments were still being conducted when Alex died, however Pepperburg says there was enough statistically significant evidence to suggest that Alex was really doing addition.
According to Ewen Callaway’s Nature News article, when asked “how many total?” in response to questions like 3+4 or 4+2 Alex chose the right answer nine out of 12 times. When presented sequentially with three sets of objects underneath three cups, Alex was able to total the objects correctly eight out of 10 times. It used to be believed that the ability to understand the numerical value of a set was dependent on language, and thus a specifically human characteristic.
To date, Alex and a chimpanzee named Sheba are the only non-human primates that have been able to successfully perform addition. While two examples isn’t exactly a lot, the research is exciting because it demonstrates that a higher level of thinking is possible in other species. So are we headed for a planet of the parrots? I’m going to go with no, but it is still very cool to see what Alex was capable of doing.