When you’re a patient in a hospital, you don’t need shoes. You’re not on your feet much, and they’ve got you covered with socks that have little white nubs on the bottom to keep you from slipping. This is why I didn’t notice that my shoes were missing until several days (I didn’t keep track of time very well ) into my hospital stay.

I was in a hospital for surgery to remove an acoustic neuroma (also called a vestibular schwannoma) that was growing on the eighth cerebral nerve running from my brain to my right ear. I’d checked into the hospital unexpectedly. I’d woken up that morning with increased symptoms and had gone to see my doctor straight from work. She recommended surgery the next morning, and wanted me to check into the hospital immediately. She told me to just walk to the emergency department, which was right across the street from her office – in fact for several blocks the area is nothing but hospitals and medical buildings. I walked in wearing my work clothes and a pair of black leather riding boots, and explained who I was and why I was there.

The first few hours after I was admitted were chaotic. There had been a terrible fire in Boston that day. Two firefighters lost their lives, and the emergency department at the hospital where I was treated received several patients from the scene. Since my surgery was unscheduled and my arrival unexpected, no one had clear instructions about where I was supposed to go.

As a patient, you have to belong to someone. A doctor has to say, “I’m responsible for this person”. This is the doctor who signs the forms, and at the end of the day is ultimately in charge of your care. My problem wasn’t that no one claimed me, it was that too many doctors claimed me. I had a doctor from the emergency department, a doctor for my ear, a doctor for my brain, and my primary care doctor attached to my case. There were conflicting stories about where I should be, so I was shuffled around a lot. The problem was that I didn’t fit neatly into one of the categories that medical specialties are divided into. I wasn’t just an unexpected arrival, I also wasn’t an easy to assign case. This meant that the hospital staff who were giving me instructions were themselves receiving conflicting instructions. 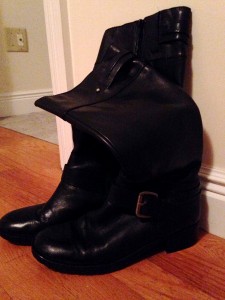 My trusty boots, found after their hospital adventure.

In the emergency department I was told I needed to be admitted in a building across the street. I offered to walk (according to Google Maps it’s just five minutes on foot), but was told that wasn’t allowed and had to be transported by ambulance. It probably goes without saying that I felt ridiculous. Once there I was told I actually needed to be in a different building on the side of the street I started on. Again, I wasn’t allowed to walk there, so that meant another ambulance ride. Once I arrived in the right building, I was assigned a room but was taken down for several hours to the imaging department. Finally, I arrived back to the room where I’d spend the night before the surgery. Somewhere along the route, I removed my boots in exchange for the slipper socks. By the time I settled into one place for the night, with 12 hours of neuro-surgery looming ahead of me, getting a hug from my Mom was far more important than the boots. I’d forgotten all about them.

After the surgery, I wasn’t in any sort of condition where I could think about shoes. I spent an entire day in surgery, and another lost in the fog of trying to wake up post-anesthesia. The type of tumor I had affected my balance, so walking was a struggle. A slow, plodding lap of the hallway outside my room, propped up by friends and family was all I could manage. After a few days, I started to pull myself together and remembered the belongings I’d had with me when I arrived at the hospital. My work clothes, my backpack, my grey wool pea coat, my boots. My family assured me they had everything, but when they went to show me, the clothes, bag and coat were there – but no boots. Somewhere in the shuffle, my boots had gotten lost.

For inanimate objects, I relate a little too much to my boots. I was never lost per se, but as a patient if your condition straddles medical specialties you can feel passed around. People are certain you belong to someone, somewhere, they just aren’t exactly sure where that is.

Every time I talk about how I had a brain tumor, I feel guilty. Guilty because that’s not quite accurate, and the science communicator in me can’t help but cringe. An acoustic neuroma grows from the nerve sheath cells that coat the eighth cerebral nerve, which controls your hearing. My tumor was in my inner ear – affecting both my hearing and my sense of balance. To classify my tumor as a brain tumor seemed off to me, after all it wasn’t growing from the cells that make up the brain itself. Yet, it was right next to my brain. Sticking to my brain, in fact. Sticking to my brain in such a way that hours of surgery were needed to get my grey matter to finally relinquish it. It was certainly brain surgery, but it wasn’t just a brain tumor. It was in my inner ear growing on the nerve. This is why I didn’t just have one surgeon, I had two (well, many people were in the operating room). One of my surgeons was a specialist in skull base neuro-surgery for the brain and one was an ear, nose, and throat surgeon for the inner ear. I was very lucky to have both of these doctors on my team.

As much as it was my medical team, I certainly wasn’t the one steering the ship that day. Since I was in an anesthesia induced stupor I wasn’t the team captain – so then who was? Two surgeons of equal standing, each with a different medical specialty, each with their own purpose for being there. Who was in charge? Luckily, my doctors have worked as partners for a while and there were no power struggles over my care, but it did come into question while I was recovering. Whose patient was I? Where did I belong?

The hospital floors were broken up by medical specialty. Did I belong on the neuro floor with the stroke patients? Or did I belong on the ear, nose, and throat floor with the patients having surgery for a cochlear implant? Where was I supposed to be? In the end, the hospital split the difference. My ear, nose, and throat surgeon became the primary on my case, but I spent my time recovering on the neuro floor. They sorted it out, and carved out a niche for me to belong, but the lines weren’t clear. I didn’t fit into the boxes our current system for dividing medical specialties silo patients into.

My boots didn’t fit either. We found out that the reason my boots were lost was because they didn’t fit in the bag they’d given me for my personal belongings. We had everything that had made it into the bag, but the boots had been unintentionally abandoned. When you don’t fit in the box, or the bag, assigned to you, your choices can be limited. You run the risk of slipping through the cracks. You can try to squeeze and jam your way into the appropriate container, but it won’t meet all of your needs. You can try to break out of the box, but you might get left behind. The human body works as a unit. Conditions like mine have effects on multiple systems, and don’t fit easily into a category. Special attention is required to make sure that patients who don’t meet the definitions make it to the right destination, and receive the right care.

Ultimately, the hospital lost and found tracked down my boots and delivered them back to me. They figured out to whom, and where they belonged. With me too, the staff sorted out to whom, and where I belonged. I received excellent care, and all of the support I needed for the effects the tumor had on my ear and hearing and the effects it had on my brain and balance. The whole experience left me wondering though, if we can’t do better than the lost and found? I’m not about to suggest ways to overhaul our healthcare system, because I don’t have any, but if I’d had more than one bag for my belongings (or maybe no bags at all) I might not have lost the boots in the first place.