During my nearly three week blogging hiatus (caused mostly by the fact that I moved and started a new job) I also took my first trip to California. It was recommended to me on twitter that I check out the Natural History Museum of Los Angeles, which when I looked it up led me to the Page Museum at the La Brea Tar Pits. The Page Museum houses one of the world’s largest collections of late Pleistocene fossils and is the only constantly active urban Ice Age excavation site in the world. Mammoths? Yes, please. So my family (also intrigued, though not as much as I was) agreed to make a visit to the La Brea Tar Pits during our trip, and boy was it a tar pit. But it was also so much more.
The La Brea Tar Pits are located in Los Angeles. The area of Hancock Park (where the lake pit pictured above and the museum are located) has crude oil underneath it. The oil seeps up along fault lines and when it reaches the surface it forms pools and becomes asphalt. The tar has been seeping up for tens of thousands of years, and at times would be deep and thick enough to trap animals. Water, dust, or leaves would obscure the tar, and when animals would wander into the pit they would become trapped. The struggle to get out of the tar would attract predators, which could also get trapped in the tar and eventually die. The remains of these animals would then be enveloped in the tar, which does a remarkable job at preserving the bones.
While the tar pits were known about as early as the 1780’s it wasn’t until 1875 when William Denton, a professor at Wellesley College, visited the Hancock family’s property at Rancho La Brea and identified a piece of bone as a tooth from a saber-toothed cat that the remains from the tar pits were identified as belonging to a species that wasn’t just a typical modern animal. Despite this it wasn’t until 1901 when geologist William W. Orcutt, who was checking out prospects for oil production on the land, noticed a piece of armored hide from an extinct ground sloth in the asphalt that the real process of uncovering the La Brea area’s hidden fossils began.

A display of 400 dire wolf skulls at the Page museum
Credit: Erin Podolak

Excavations of the area have been ongoing since the initial 1913-1915 project began. The 23 acre Hancock estate was officially turned over by the family to Los Angeles County for scientific exploration. The density and richness of the La Brea area is really remarkable. Several examples of prehistoric species have been uncovered at the La Brea Tar Pits including mammoths, mastadons, dire wolves, short-faced bears, ground sloths and saber-toothed cats. I think it can be easy to forget that until only 11,000 years ago North America had some tremendous large mammals that were all driven extinct. My favorites are definitely the short-faced bear and the ground sloth. By comparison, dinosaurs last roamed the Earth 65 million years ago. The last ice age dates to 0.3 million years ago. The Pleistocene, when many of the La Brea animals would have lived dates from 40,000 to 11,000 years ago. Several of the bones have been dated using Carbon-14 radiometric dating, which showed some of the oldest remains to be 46, 800 years old.

Despite all of the fossils that have been recovered from the area, the tar pits still continue to give up more. According to the Page Museum’s website since 1906 more than one million bones have been recovered representing over 231 species of vertebrates in addition to 159 species of plants and 234 invertebrates. An estimate of the size of the Page Museum’s collection is at about three million items. Three million. Excavations are still going on today at the La Brea Tar Pits with Project 23, a series of 23 crates of samples from the pits that were uncovered when the neighboring Los Angeles County Museum of Art excavated the area to build an underground parking lot. 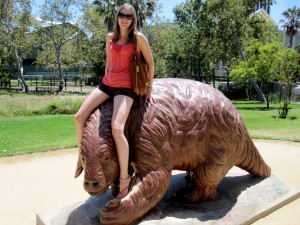 You just can’t visit the La Brea Tar Pits without riding the
ground sloth. Or at least, that is how I felt.

What I loved about the La Brea Tar Pits was the ability to ignite a sense of imagination. I thought it was great to try to visualize what the area would have looked like some 40,000 years ago. Trying to imagine an animal like a mastodon just wandering by you as you watch tar bubbling up to the surface of the lake pit definitely peaked my sense of wonder at the world. If you find yourself in the Los Angeles area, I definitely recommend the La Brea Tar Pits as a must see for kids and adults. The museum is fun and informative and the grounds that you can walk around and peer into the pits are definitely interesting to see. Really, who wouldn’t want the chance to ride a ground sloth?