While I know everyone in the science writing community is tuned into this story, I can bet that among my personal friends and family I am the only one who has “farting dinosaurs” as an item on their to-do list. While the science media machine has given us plenty of “say what now?” moments I found this story and how it has been handled and covered in the media face palm worthy enough to warrant a closer look.

Did Dinosaurs Fart Themselves to Death?

What the paper concludes is that the amount of methane released would have impacted climate. From the press release on this story: “Sauropod dinosaurs could in principle have produced enough of the greenhouse gas methane to warm the climate many millions of years ago, at a time when the Earth was warm and wet.” What about that says dinosaurs died from farting? There has been plenty of media attention for this story, and certainly some more even keeled coverage that actually bases the headline on the climate conclusions. Some examples include Never Stand Behind a Dinosaur on Climate Central, Dinosaur Farts May Have Caused Prehistoric Warming on RedOrbit or It’s A Gas: Dinosaur Flatulence May Have Warmed Earth on Yahoo/Reuters.The quick answer is no. Was a paper released regarding dinosaur farts? You bet (In the journal Cell Biology.) Did it conclude that farting led to the mass extinction of the dinosaurs? No. Of course with the headline potential a story like this poses how could some in the media resist, truly? 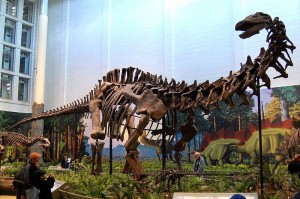 Apatosaurus louisae at the Carnegie Museum via Wikimedia Commons

To draw conclusions about extinction and death when the topic of the paper is actually the amount of methane dinosaurs may have contributed to the atmosphere and thus climate change is misleading. In the media there has been the Fox News of it all whose headline “Dinosaurs ‘gassed’ themselves into extinction, British scientists say” goes right for the good stuff regardless of the paper’s conclusions. There has also been the necessary debunking on blogs like PZ Myers’ Pharyngula with “the reports of dinosaurs dying of farts are greatly exaggerated.”

Another interesting aspect of this story is the fact that is was subject to an embargo break. For the non-journalists among us an embargo is when journalists are informed about a story but asked to hold it for one reason or another. This is a common practice and in general journalists tend to abide by it, but not always. Often in science journalism the story is embargoed until the release of the paper in whatever journal it is being published. For more on this embargo break, check out the blog EmbargoWatch which does a consistently good job of keeping track of such story breaks.