This past weekend I spent all day Saturday reading Zeitoun, by Dave Eggers. I thought it was a great example of literary journalism, and also personally thought provoking. The book tells the story of one family in the days before, during, and after hurricane Katrina hit New Orleans in 2005. In addition to your typical survival story, it is also about being a Muslim in a post-September 11th America. 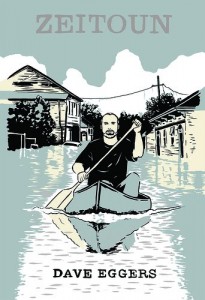 My only first hand contact with Hurricane Katrina was through the students from Tulane who were displaced and so spent the Fall 2005 semester at Lehigh. College all over the country took in the Tulane students until the campus could reopen. Other than that, I don’t know anyone who lives in that part of the country. Of course I followed the media coverage, but there is nothing like hearing someone tell their own story of what they went through. Eggers’ reporting of the Zeitoun family’s story was like hearing them tell it to me themselves. I felt like I was right there with them and it was more moving than a lot of the reporting that I was exposed to in the days after the hurricane struck.

As a Muslim family they had to also deal with the fear or being attacked for their faith, and ultimately Abdul (the father/husband) was suspected of terrorism in a lawless New Orleans, when there was no real evidence against him and arrested by the makeshift police forces in place. As someone deeply and permanently affected by September 11th, it was hard at first after that attack to distinguish between subsets of faith, to try to figure out who had struck out against my family. But ultimately by educating myself I’ve come to the conclusion that Islam is a peaceful religion, which believe me has been a hard sell to some of my friends and family.

I feel conflicted sometimes because I don’t believe people should be persecuted for their religion, the United States is grounded in religious freedom, but at the same time we need a way to protect ourselves from people who believe their religion entitles them to hurt anyone who isn’t of their faith. I’m not sure what the answer is, but arresting Muslims based on no evidence certainly isn’t it. The Zeitoun’s story made me angry because with all the resources this country has it its disposal, lawlessness should never be a concern, even in a decimated city. How does a country like the United States lose total control like that?

I don’t particularly have any answers to the issue of how to maintain religious freedom in the face of Terrorism, I am after all a mere journalism grad student, but you should read Zeitoun because it is important to at least think about these issues. You need to be exposed to other people and their stories and perspectives to understand the implications of public policy.