We live in the future. While I’m still waiting for my hover car, there are many other examples I could give you about the amazing technical advances that make me feel like we have tremendous opportunities at our finger tips, if we just know how to harness their power. One of the ways I think we are already living in the future is with the power of social media, particularly Twitter and blogging. While I’m relatively active on Twitter and try to keep this blog up to date and interesting, my skills in this arena are far from the super stealth ninja moves of many of the people who have seized the opportunities to network and build an audience through social media. 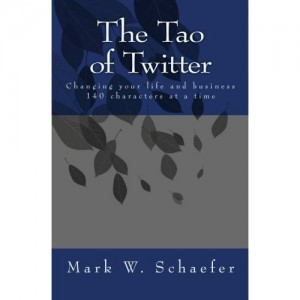 This semester I am taking a life sciences communication class on social media. I recently had an opportunity to learn from one such social media ninja, when my class interviewed Mark Schaefer (@markwshaefer) over Skype. Schaefer, who was recently named by Forbes to a list of the top 50 social media influencers and named by Tweetsmarter as Twitter user of the year for 2011, is a successful marketing consultant, professor and author. For my class we read his book, the Tao of Twitter, and then got to ask him questions about how to make the most of the Internet, and get our foot in the door in social media.

The main thing I took away from talking with Schaefer is the importance of having substantial content that supports the online persona you build for yourself. It is one thing to just be active on Twitter and networking, but if you don’t have content to support what you claim to stand for, you aren’t going to reach a significant level of interaction. He said people that really have the power on the Internet are the ones that have content that they are creating and moving through the system, which I feel like I’ve definitely witnessed in the science writing community on Twitter. The core of my Twitter experience thus far has been reading blogs, and sharing links to interesting blog posts written by others.

Another thing Schaefer shared that I found interesting was that there is value in blogging even if you don’t have a high number of followers (that you know about at least, because as I’ve said over and over again I don’t know where the hits on this blog come from). I am winding down my time here at UW, and am starting to look for a job. I thought he really made a great point when he said that a good blog can be a great selling point in an interview, and can make an interview last much longer so a potential employer gets a better sense of your skills and ability. He said that even if you don’t have many people reading your blog, you can still show a potential employer or colleagues what you can do, what you can write, how you think, and what you are passionate about. I knew that employers would see my blog, but I hadn’t really considered what a great opportunity (or shortcoming, depending on how you see it) the blog could be.

A few other tips I took away from Shaefer include:

I started this post by talking about how we are already living in the future. I can’t think of a better example of that then the fact that I got to discuss how to improve my involvement in social media by Skyping with one of the most effective Twitter users out there right now. This is the way of the future, and I’m grateful to have had the opportunity to talk to someone like Schaefer. My goal for this semester (aside from being a ninja) is to comment on other blogs which is something I never do, and really know that I should in an attempt to improve commenting and interaction here on Science Decoded and on Twitter. I need to start talking to people, rather than just talking AT the Internet. It would also be nice to, you know, find a job. Think I can do it?