Explaining All Of Human History Shouldn’t Be Hard, Right? So I’m about 15 years late hopping on the band wagon for this one, but I recently read Jared Diamond’s Guns Germs and Steel: The Fates of Human Societies. The book was originally published in 1997 but at that time I was only 9 years old, and most certainly wasn’t ready to ponder the question of why some societies were able to dominate others in the course of human history. But, for my birthday this year my good friend Cassi gave me a copy of Diamond’s book because she’d heard good things about it from her Dad and she thought it was something I would like. For the most part, she was right. 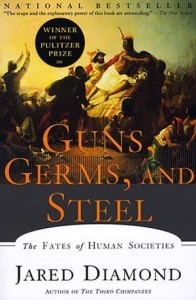 Overall I liked the book a lot, it brought up some really interesting ideas about human history that I had never considered before. But I struggled a little to get through the whole book, reading with the amount of concentration it deserved. Most of my difficulty stemmed from the way I read, which is particularly disjointed and distracted on the train. There are some parts of Diamond’s book that are just really dry, but I don’t think the book would work without these dry patches because explanations are necessary. There are also plenty of anecdotes and more narrative portions to keep the book moving forward.

Guns, Germs, and Steel seeks to answer Yali’s question, and comes back to this concept repeatedly throughout the book. Yali is a member of a native tribe in New Guinea where Diamond did field work. He asks Diamond, “Why is it that you white people developed so much cargo and brought it to New Guinea, but we black people had so little cargo of our own?” There is no single easy answer to this question. It takes Diamond 19 chapters and 465 pages to explain it and even then as he says that only gives him an average of one page per continent per 150 years to compress 13,000 years of history.

So then how do you go about answering a question like Yali’s? When a lot of the context, detail, and narrative is stripped away the main reason Diamond gives is that there are biogeographical differences between the areas of the world where societies developed and where they didn’t. These biogeographical differences include things like the availability of domesticable plants and animals, variations in climate, and differences in the navigability of different continents. Additionally, Diamond talks a lot about intellectual growth through the spread of information, in addition to the spread of more dangerous components of human interaction like weapons and disease.

When you put the context, detail and narrative back in, there are a few points that Diamond makes that hit me pretty hard. One point is the way that contact between developing societies was critical to helping them succeed. For me when I think about societies that are just starting, I assume that the longer they have to develop on their own the better off they would be. But the exact opposite is true. Societies need to develop alongside each other.

Areas like Eurasia that were way better suited for an exchange of information and ideas are the areas that advanced fastest. On the other side, areas like southern Africa and Mesoamerica struggled because their climates (desert and jungles) weren’t suitable for traveling. People weren’t able to connect and because of this not only could they not learn from each other (agriculture, language, etc.) they also didn’t develop important immunities to disease. I feel like I’ve always assumed that a disproportionate amount of resources like food and animals was the reason why some cultures flourished over others. In part the lack of resources in some areas was certainly a factor, but I was really surprised by the idea that the continent itself could have a huge impact.

I think my favorite chapters by far dealt with the Aztec, Inca, and Maya societies and how they were able to be conquered. I think I’ve always been quick to write their fall off as being caused by disease and the superior weapons of the Spanish. I had never really thought about how the isolation of each of these societies also led them to be more trusting – and that this more than anything else is what led to their downfall.

Another point Diamond makes that I found really interesting is that there are so many factors that need to align properly for a society to succeed, and it often comes down to which societies have the best balance. I always think of competition between countries as a bad thing, but Diamond shows that competition is exactly what gave Europe an edge over China when it came to dominating the colonial world. A unified China struggled with implementing new technology because if the rulers didn’t approve then changes didn’t happen. Whereas in Europe with so many small societies competing with each other if one group rejected an idea, another was sure to adopt it and help it spread. But competition also has obvious drawbacks like fighting and wars that cause widespread casualties. It really comes down to having the right amount of competition and conflict, that magical balance that allows a nation to surge ahead.

These are just a few of the ideas that Diamond discusses. I found this book to be very informative, so much so that it was almost difficult to digest sometimes. There is also a ton of background and set up so that the reader will be able to understand his analysis. One place where for me this was tedious was animal domestication. I already knew a lot about animal domestication from my class with animal behaviorist Patricia McConnell last semester, but if I didn’t I am certainly well informed for having read Diamond’s book.

There is a lot of information to be had here, and if you have the stamina and the attention span you could learn a significant amount from Diamond’s book. I do recommend it because it definitely got me thinking about history in a new way. I also think its important to point out that the book stands the test of time. My version has a 2003 update with a new afterward and an additional chapter about Japan, but even so the original text has held up well. I never felt like I was reading something out of date.

So to sum it up, its a good read, but you have to really want to read it. This isn’t a beach book or something to read on the train (like I did) it deserves your full attention, and if you can’t give it I’m not sure you’ll make it through.