I thought it was amusing that the first condoms in history were made from the casings of animal intestines. Yet, when I tried to share this information I was met with the typical head shaking, and entreaties to find different reading material characteristic of me sharing new found knowledge with friends. In my post about Mary Roach’s Stiff, I mentioned how my friends don’t find the interesting tidbits I gleaned about cadavers to be proper cocktail conversation. Well, the same goes for all the interesting tidbits I gathered from reading Andrea Tone’s Devices & Desires.

I am taking a history of science course this semester on the history of women and health in America. As a grad student in an undergrad class, I have to complete extra work to make the requirements. One of the extra assignments was to read and discuss Devices & Desires: A History of Contraceptives in America with the other grad student and the professor. I am a fish out of water in this class, having no background whatsoever in women’s issues (aside from, you know being a woman myself), and while I was aware of the timeline for the development of contraceptives there was a lot about them I didn’t know. Thus my excited, and apparently gross, interest in what I learned from the book. 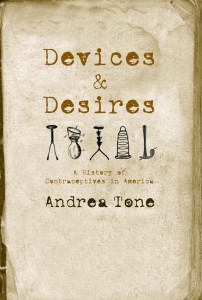 Devices & Desires can be broken roughly into three sections: condoms, the pill, and intrauterine devices (IUDs). The section about condoms was by far the most interesting and engaging. My professor (Karen Walloch) suggested that perhaps this was the section that Tone researched for her thesis, and while that is just speculation it does seem to be the part of the book that the writer was most invested in. Fun fact: when scientists first developed a way for rubber to be shaped and thus used as condoms, companies that today we associate with tires (Firestone, BF Goodrich, Goodyear) all dabbled in condoms.

My favorite chapters in the book dealt with the military’s stance on condoms during WWI, and how they eventually had to cave and endorse them because the health care cost of venereal diseases was through the roof. The book had a few different advertisements and propaganda posters for servicemen urging them to stay away from women that I found highly amusing. Apparently just say no, and taking the moral high ground are no match for a dame in a dress.

After the condom chapters the book tackles the birth control pill. While I found the information interesting, I felt like it fell a little flat. For such a controversial topic, that had such a drastic impact on women’s lives I think Tone could have infused the writing with more personality. It just wasn’t as colorful as the condom chapters. As a science writer, I did really appreciate the description of the research process that went into making synthetic hormones and how these were tested. The initial testing on the pill was done in Puerto Rico, because the researchers/financiers thought there wouldn’t be as much controversy and public push back. They were very wrong. But, if you aren’t interested in the scientific process, I feel like these chapters might drag on for you as a reader.

From the pill, the book moves on to the IUD. Tone focuses on a particular IUD, the Dalkon Shield. I was really shocked by this part of the book. Shocked, and really kind of outraged that I hadn’t heard about this health scandal. In the 1970’s the Dalkon Shield was the cause of more than 200,000 lawsuits due to a high percentage of severe injury among its users. The design of this IUD made it a ticking time bomb that women were sticking into their bodies. Infections (and subsequent Pelvic Inflammatory Disease) caused by the materials used in the device caused severe damage to women’s reproductive systems (even sterility), the device could also perforate the uterine wall, and women who did get pregnant while wearing the device often had children born with severe birth defects.

Lawsuits against the A.H. Robbins Corporation (who marketed the Dalkon Shield) won millions of dollars in damages for women and families that had been affected. The real tragedy in the Dalkon Shield scandal is that the company was well aware of the device’s problems. Internal documents and studies proved that the company knew the device was dangerous, and marketed it anyway. As a result of the scandal, in 1976 the Medical Device Amendments to the Food, Drug, and Cosmetic Act mandated the U.S. Food and Drug Administration for the first to time test and approve of medical devices.

It is important to note that the major flaw in the Dalkon Shield: a porous, multifilament string that was basically a highway for bacteria straight up into the uterus, isn’t a part of IUDs currently on the market. I know several people who use IUDs and am relieved to know that the devices have been improved since they first debuted on the contraceptive scene. However, the Dalkon Shield story really made me stop and think about the human cost of not only contraceptive devices, but all new medical breakthroughs.

As much as I learned from and was moved by reading the chapters about IUDs in Tone’s book, these chapters left me wanting more. I felt like the book ended very abruptly, and that there was still a lot that could have been said about the topic. My professor pointed out that when you are writing a book like this, you have to choose a place to stop, otherwise you could just go on and on. I understand that, but I think the book could have ended more smoothly.

Overall, I thought Devices & Desires was a great read and I learned a lot from it that I hadn’t been aware of otherwise. The book was a little disjointed in parts, and you have to be invested in seeing it through (and apparently not squeamish) but if you come from an uninformed background like mine, I can almost guarantee you’ll learn something new.