There was a great article in the New York Times about the confusion that took place between the media, scientists, the government, and the public regarding the New Year’s Eve bird deaths in Arkansas. Conspiracies Don’t Kill Birds, People Kill Birds by Leslie Kaufman does a great job of explaining how the bird story got blown out of proportion. 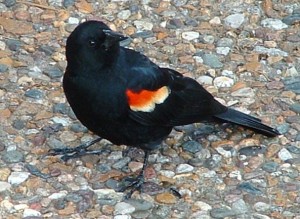 Basically, birds die all the time. It’s not all that unusual for flocks of birds to die, according to the article’s statistics (from the National Audubon Society) approximately five billion birds die in the US every year. Rural cats kill 39 million birds a year. So basically, the whole incident wasn’t a conspiracy or a case of poison run amok. Birds die, thats kind of all there is to it.

Flying objects can interrupt birds’ flight and send them careening into buildings and billboards. So while I was pretty skeptical of the fireworks explanation on the basis that if fireworks cause bird deaths we would have heard about it before this, it is possible that was what happened in Arkansas. That would mean that all the subsequent bird death articles in the media could very well be a case of the media being bored and picking up on a story that really wasn’t a story because it happens all the time.

I hope everyone had a great start to the new year! Over my weekend blogging hiatus the big science story in the US was the mysterious death of thousands of birds on New Year’s Eve in Arkansas.

More than 3,000 blackbirds fell in the town of Beebe, AK and samples have been taken for analysis to determine what could have killed the birds in one mass attack. Initial reports said that the birds have died due to trauma (they fell out of the sky, so clearly that was a shocking conclusion.) Now the Arkansas Game and Fish Commission is reporting that fireworks launched to commemorate the new year caused the birds’ demise.

However, today it was reported that approximately 500 red-winged blackbirds (the same species found dead in Arkansas) and starlings fell from the sky in Labarre, Louisiana, hundreds of miles south of the original bird deaths. Early reports from Louisiana also state that the birds suffered some trauma, although an official cause has yet to be determined.

One theory on the mysterious deaths is that the mere sound of new year’s fireworks could have startled the birds, causing them to fly into buildings or billboards. Although, you have to wonder why we’ve never heard of fireworks (launched every year for new year’s, the fourth of july, weddings, fairs, and numerous other events) causing birds to die in large, concentrated groups.

I think that we’re definitely going to have to stay tuned to this story to see what happens after the birds from Louisiana are analyzed more closely, and also watch to see if more birds die in other areas — which most certainly wouldn’t be attributable to fireworks.

New research out of India is drawing a correlation between a spike in the black market trade of owls and the popular Harry Potter books and movies. Apparently the stories, which feature a white owl (named Hedwig,) have led to a surge of people seeking owls as pets, as well as for what the BBC calls “black magic” rituals.

As a reader, I am interested in the research methods used to draw the correlation between the loss of owls and Harry Potter. I wish the article talked more about how the researcher came to his conclusion, because simply noting the popularity of a series that features an owl as a minor character (I think its minor, I’ve never actually read a single one of the Harry Potter books) is a far cry from actually quantifying its connection to a decrease in owls.

This type of investigation reminds me of the correlations made between video games and violence, or metal music and violence. I think that how studies of this type are conducted is a pretty important component to the story, because simply stating that something is a significant relationship doesn’t make it so, I want to see the numbers.