I recently had the privilege of attending the Science Online conference in Raleigh, NC. The conference, hosted by North Carolina State University, has been described as “returning to the mothership” for bloggers, social media enthusiasts, journalists, writers and scientists passionate about communicating online. I heard a few people this year saying they didn’t feel that way, but I guess I drank the kool-aid, because I certainly did. 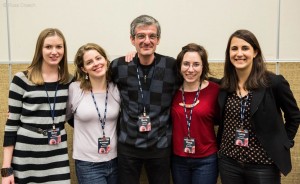 Attending Science Online in person was something I wanted to do because blogging and social media isn’t a part of my full time science writing job, but it’s still extremely important to me. Communicating effectively means using whatever platforms fit the story the best, and I feel like I do some of my best writing on this blog. I get to be my own editor (which comes with some pressure) but I also get the freedom to explore whatever I feel like I need to talk about, to share what I love and to hopefully help other people learn new things or be encouraged to try writing themselves.

I owe so much to Bora Zivkovic, blogs editor at Scientific American and co-founder of Science Online, for bringing me and my little blog into this community. Attending Science Online in person really did feel like coming home. I know a lot of people have said that before, but for me it was actually the first time I felt like I belonged in such a large group. I’ve been on teams, in clubs, in a sorority, in a grad program, and have held jobs where I’ve gotten to work alongside other science writers – I say with all sincerity that I’ve never felt so comfortable being my true self around so many different people, and that’s coming from an extrovert.

So, now that I’ve established that I’m all-in on the love-fest aspect of Science Online, what were the highlights?

A few other things:

For more posts on the conference check out the list from the Scio13 Planning Wiki.