Science, bastion of intellectual inquiry, is turned to for answers to many of the questions that plague the finest minds in the world. Defined as the intellectual and practical activity encompassing the systematic study of the structure and behavior of the physical and natural world, science is essentially the pursuit of answers, and really with no cure for diseases like cancer or AIDS, what more pressing question could be facing society right now than how different are black and grey squirrels? 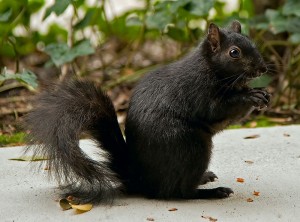 Sarcasm aside, this post is dedicated to the pursuit of information regarding the differences between black squirrels and grey squirrels. Yes, squirrels. Not exactly a charismatic animal, unless you are the kind of person that thinks everything small and furry is cute, and despite this post I’m not. But then why bother to write a post about the little critters? When I saw this story in the BBC about the squirrel research going on, I wanted to do a post because I think it is a good example of one of the best things about science – that all questions are important, because there is inherent value in learning more about the world around us.

I was purposely sarcastic about the squirrels in the beginning of this post to make a point. I feel like a lot of people look at science research being done, and are unimpressed with their return on investment. Granted, the squirrel research is in the UK, and I’m coming at this from a US perspective, but I can see a lot of people that I know reacting with the same level of sarcasm and disdain that I opened with in this post. Why squirrels? What is so interesting or important about squirrels? Do we really need to know if there are other differences between them besides color? Couldn’t the resources and intellect of the researchers be better used elsewhere? Maybe. But, understanding the creatures that share this world with us, even the squirrels, IS important.

The squirrel research that caught my attention, according to the BBC, is an effort by researchers from Angila Ruskin University in the UK to try to figure out the rate of spread through the UK for black squirrels compared to grey squirrels, if the black squirrels also carry the “grey squirrel pox” disease, and also to build genetic profiles of the two mammals which though different in coloration due to a genetic mutation, are the same species and do interbreed. The project is being crowd sourced to the public (which I guess is the reason this was coverage worthy?) to help report sightings of the black squirrels to help track their locations. The public is also being called on to provide access to any black squirrel remains for genetic testing. That is the polite way of saying reporting roadkill so the researchers can take samples.

I’m not trying to say that this is groundbreaking, shocking, or even all that note worthy. I’m not sure why the BBC ran the story, aside from the public interaction angle. It isn’t exactly flashy or eye catching. I’m still glad it is happening though. Questions matter. To me, it isn’t even about the squirrels, really. If someone honestly wants an answer to a question about squirrels, why not inquire about them? Especially in this way, where public interaction will keep costs down? I support chasing the answer to a question, even if it isn’t going to be Earth shattering. Curiosity is the basis of all the important breakthroughs, and who is to say what will be important in the future? We should be attacking all the questions. Ask, why? It can make all the difference. Even if you are just talking about squirrels.

4 thoughts on “Something About Squirrels aka Why ALL Questions Matter”