Science For Six-Year-Olds is a recurring segment on Science Decoded for Mrs. Podolak’s first grade class at Lincoln-Hubbard elementary school. This year in first grade we’ve also learned about groundwater in Africa, noctilucent clouds done an experiment with butter, talked about hurricanes and sugar maple trees, and learned a song about the states of matter.
***
This science for six-year-olds post is a little different than my previous posts, because this time I’m back-blogging about a presentation that I already gave to the first graders in person. Since I’m now back in New Jersey, I was able to visit their class to talk about my favorite subject, bears. While we know I’m partial to polar bears, in Mrs. Podolak’s class we talked about black bears.

Black bears are the type of bear that can be found in New Jersey. The reason I decided to talk about them with the first graders is because I brought Bob in for a bit of show and tell. This is Bob: 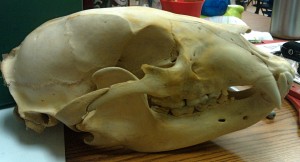 I was also impressed with their existing knowledge of animals. The class has been working on research projects to learn more about specific animals of their choosing. We talked about whether or not black bears are predators and if they are dangerous to people. I started to explain to them that black bears are omnivores, which means that they are opportunistic eaters and will consume plants, berries, bugs, or meat. The kids already knew what omnivore meant, and they were also able to tell me about cartilage and that sharks are cartilaginous fish. It was a lot of fun to see what they already knew about black bears, and to listen to their observations.

Bob is a black bear skull that a friend passed along to my Dad a couple of years ago. The skull was found by a hunter in the woods in northern New Jersey within the normal range for black bears (Ursus americanus) in this area. The skull was pretty clean, but we boiled it just to be sure and now it makes for a great show and tell item to talk about the species and how it lived. The kids really loved getting to hold Bob and take a look at his jaws. They asked some great questions, like “where did his brain go when he died?” To answer that we had to talk about decay and how bacteria will break down tissue that isn’t alive anymore. Deep stuff for first graders, I was impressed. 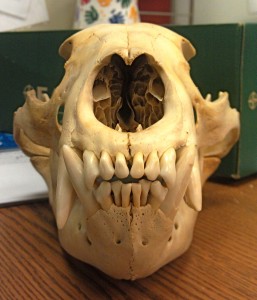 There have been confirmed sightings of black bears in all 21 counties in New Jersey, but they are more concentrated in the northern area of the state. I just wanted to share a few more facts about black bears that we didn’t get to talk about in the time we had in class:

For more information about black bears in New Jersey, you can check out the New Jersey Department of Fish and Wildlife website (they have some good resources specifically for kids!) It was a great learning experience for me to try to communicate science to first graders. I was continually surprised by the complexity of the material they were able to understand and often stumped, but impressed, by their questions. I hope everyone who reads this blog who isn’t in the first grade also enjoyed the subject of these posts. Happy summer vacation, everyone!