Science For Six-Year-Olds is a recurring segment on Science Decoded for Mrs. Podolak’s first grade class at Lincoln-Hubbard elementary school. This year in first grade we’ve also done an experiment with butter, talked about hurricanes, sugar maple trees, and learned a song about the states of matter.
***
Hello First Graders! Now that it is officially Spring, it seems like a great time to start your new science unit on clouds. I hear you have started to learn about what clouds are made of, and the different types of clouds. I wanted to share some information with you about a special type of cloud called a Noctilucent cloud. Have any of you ever heard of a Noctilucent cloud? They are a unique type of cloud that can be observed at night and are formed by ice at the line where Earth’s atmosphere meets space. These clouds are known for looking shiny because they are so high up in the atmosphere that they stay lit up by the sun, even after it has set for the day. 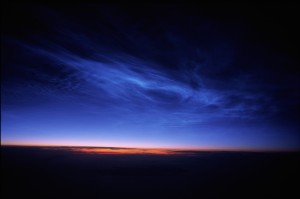 This kind of cloud is a relatively new discovery. They were first observed in 1885, which is a long time ago but not for scientists who have been observing and learning about the Earth for as long as humans have existed. Since they began studying Noctilucent clouds, scientists have learned that they form at temperatures around -230°F. What is the temperature outside today? What about in your classroom? Can you imagine how cold it is at -230°F? In the upper atmosphere when it is that cold, dust blowing up from Earth below or falling down into the atmosphere from space gives water vapor a place to condense and freeze.

Noctilucent clouds are most visible as the sun is going down or right after it has set, typically in Summer months between 50° and 70° north and south of the equator. Can you find where that is on a globe? Lately these clouds have been appearing outside of their normal range and with increased frequency. This has led some researchers to hypothesize (propose an explanation based on the preliminary evidence) that the appearance of these clouds may be linked in some way to global climate change.
Global warming is causing the atmosphere to heat up, and when it heats up it expands. Noctilucent clouds form at the edge of the atmosphere, if the atmosphere is pushed out further it will be colder (because it is very cold out in space). If it is colder, it is possible that this would result in more Noctilucent clouds forming and forming in different areas. However, this is just one possible explanation scientists still have a lot of research to do to learn more about these special clouds and figure out exactly why they are increasing in prevalence.
Check out this great video of Noctilucent clouds captured from onboard the International Space Station. If you have any questions let me know and I’ll do my best to answer them, but remember scientists are still learning about these clouds and there may not be answers yet.
*I got the idea for this post when this Wired article popped up in a Google search about clouds. For more information about Noctilucent clouds in general, NASA also has some great information (though not specifically for kids.)