Do you care that a rare type of freshwater mussel has been nearly wiped out? Unless you are like me in the throes of Summer and I am still looking-for-a-job-limbo, I doubt you have the time to give more than a moment of attention to the freshwater pearl mussels in Cumbria in the United Kingdom…if that. In my daily perusing of the BBC I saw this article, Rare mussels ‘almost’ wiped out and I couldn’t help but think A) how in danger is in danger enough to warrant media coverage and B) does covering close calls for endangered species result in ‘boy who cried wolf’ response from the public? 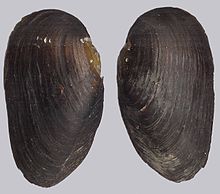 In summary, the article is about a massive die-off of freshwater peal mussels (Margaritifera margaritifera) which are a type of mollusk. The BBC reported that 80,000 of the mussels were lost in a single event out of a total estimated population of 12 million in England and Scotland. It was speculated that the event was caused by a loss of outflow from a lake that caused water temperature to go up and oxygen levels to go down. According to the BBC’s article the loss is significant because it happened in an individual incident and because the freshwater pearl mussel is listed by the International Union for the Conservation of Nature (IUCN) as one what the BBC called the most endangered species.
I was struck by the term “most endangered” because endangered is in itself a classification. I’ve written about IUCN red list classifications before, but I went back to their website to check how they define the status of a species. The IUCN has nine classifications for a species, they are:
I can’t help but wonder, how much nuance is too much nuance? I think it is very important to provide context and evidence when doing something like evaluating the state of a species. As science writers, we need to be specific because it helps avoid confusion or misrepresentation. I think the classifications are good because they help people determine how a species is doing and what should be of most concern. However, is it possible that by covering the shift of a species from level to level, or a mostly-bad-but-there-are-still-some-that-are-doing-okay-so-all-is-not-lost-event we are causing the public to care less? How many people read the BBC’s article and thought, “oh no, not the freshwater pearl mussel!”
But is lack of love for the freshwater pearl mussel really a reflection of uninteresting media coverage or just the lack of sexiness of the mollusk? Would the giant panda cause a bigger stir, just because it is a giant panda? Probably. Though theoretically all species are important, and seeing one in peril is always worrisome. While you can definitely argue that species like this and the problems they face don’t get nearly enough media attention and thus the coverage that it does get is a solid positive, I can’t help but wonder if people start to get jaded when they see stories like this. Personally, I thought the article in the BBC was interesting. I learned about a species that I wasn’t familiar with and problems that it and other species face. I think it was worth the time and worth the coverage, I just don’t think that opinion is going to land me in the majority.
So then is this a damned if you do and damned if you don’t situation? Perhaps it is. I think the argument could be made on both sides. Covering an event that is important to a specific species, even when it does not cause it to become endangered or extinct can muddy the waters so to speak and make readers exasperated with stories that don’t seem pertinent in the grand scheme of things. Covering an event that is important to a specific species can also provide the public with information that is necessary to helping that species survive and can help them learn something interesting in the process. I think any story about species conservation walks a fine line between being appealing and entertaining while still being relevant and interesting.
What do you think, is the freshwater pearl mollusk worth covering? Would you cover it in print or only online? Does having an online platform make you more likely to cover it because it costs you less to do so? Do you think you can make the public jaded with stories that are interesting to science lovers but perhaps not to the general non-science minded public? Would that affect your choice to cover the species? Lots of questions and things to think about. If you’ve got some thoughts on the matter I’d love to hear them so leave them in the comments!