Do as I say my friends, not as I have done. Recently I read this post by Genomic Repairman (@genomicrepairman) in which he provides 10 basic tips for grad student science bloggers, which are really just good tips for any novice blogger. I also read this post about whether or not science writers should always read the academic paper they are writing about, something I try my best to do but haven’t always done. These two posts inspired me to assemble some of my own tips and thoughts about science writing. I’ve made the executive decision to frame this post around the stupid things that I’ve done, in the hopes of helping writers new to the blogging scene avoid my mistakes (so that they can make their own, of course). Also because it is always more interesting to know how someone has messed up than to hear them talk about how great they are. So I’ve decided at the risk of public embarrassment, to bare my little science writing soul and share three of the things that make me shake my head at my own silliness. 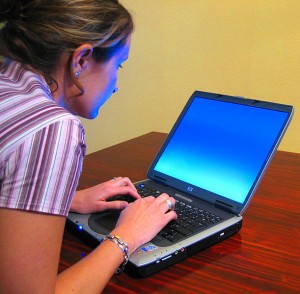 Not me, but fairly standard. via Wikimedia Commons

1. Comment on other people’s blogs. I read between 5 and 10 blog posts a day, yet I am terrified of adding comments for fear that I will sound like a moron. I have written more than 200 posts here, but leaving a sentence in the presence of the likes of Carl Zimmer scares the hell out of me. I can’t tell you how many times I have written a comment, stressed out about it, re-written it, stressed out about it some more and then deleted it completely. I’ve heard over and over that you shouldn’t leave comments unless they serve a purpose, otherwise you aren’t adding to the discussion. However, most of the time I feel like I just want to say “I like you” “I like this” “This is really smart” and thus I end up saying nothing. This is problematic for two reasons, the first being that people I admire put themselves out there in a way that allows me to tell them I admire them and I never do. The second reason is that I can’t very well expect people to leave me comments if I never comment on anyone else’s site. I have a new resolve to get involved in the conversations, but new bloggers should train themselves to comment before they become comfortably silent. Make a habit of it, so that you don’t have to break a cycle of complacency later on.

2. Put an RSS feed and subscription options on your blog. Simple enough. People want an easy way to filter through all the blogs out there, and if they can’t subscribe there by RSS or email the odds of them obsessively checking your site everyday to see if you have a new post (especially if you post sporadically like I do) is slim to none. Why did it take me a year and seven months to put these things on Science Decoded? Hell if I know. I guess I figured, well I have all the share buttons so that’s good enough right? No. No, it is not. I should have had RSS and email subscriptions from day one, and I’m kicking myself that posts that did fairly well from being RT’d on Twitter probably didn’t get me any actual followers because I didn’t have an easy way for people to keep reading posts after they found my blog. Face palm on that one.

3. Read the study, link to the study. If you are going to talk about a paper, you need to link to that paper, even better you should look at it. I mentioned in the beginning of this that I was inspired to write based in part on a discussion about whether science journalists should always read the academic paper. In general, I agree with what I believe is the more popular view that you should always read the paper if you intend to talk about it. However, I also agree with the fact that journalists aren’t always going to understand the methods and technical terms. I think the rule I go by is that I have to feel like I understand the study, either by reading the paper, talking to the researcher, or talking to another researcher in the same field to back up what the study author said. Any combination of these things could make for a well written science article, but you can’t just regurgitate a press release. Just don’t do that. No one likes it when you do that, and all those people you admire from afar because you’re afraid of the comment section? They aren’t going to respect you doing that either. Have I done it? Yes. Is that the work I’m proudest of? Not in the slightest.

Bonus tip: If you want to be a science writer, you should hold yourself to a higher standard than that of EurekAlert. Hold yourself to that standard. For me, one of my biggest mistakes was allowing others to put priority on how quickly I could get a story out rather than the quality. Don’t put yourself in the position where you see your name on a piece that you know you could have done so much better. Don’t settle for easy. If it is easy to do, who is going to be impressed and want to talk to you? You need to offer something to your readers that they aren’t going to get from a press release. This might be an interview, it might be your own analysis, or maybe it is added context but you still need to give something. Leaving a story exactly as you found it, or perhaps just going so far as to rearranging the words isn’t why we’re all here. I for one am here to learn, here to listen, and here to talk. But, how much of those things can you really do if you aren’t actually interacting? Unless you start saying something of value, you’re just going to be talking to yourself.

So there you have it, three of my mistakes. I sincerely hope they won’t be held against me. I also sincerely hope that they will help some other poor soul just getting started as a writer. This isn’t an easy field to break into, and we all stumble sometimes. But if you are open, honest and sincere in your desire to produce good science writing I think you will find that there are people out there willing to give you a chance.

8 thoughts on “A Science Writer’s Mistakes”