While I was snowbound I read Dave Eggers’ What is the What. I’d read his book Zeitoun for J669 this past semester, and I’d heard a lot of good things about What is the What so I decided to check it out for myself. Ultimately I liked Zeitoun more, but I do think that What is the What is a great read, especially for someone who knows little about the civil war in the Sudan. 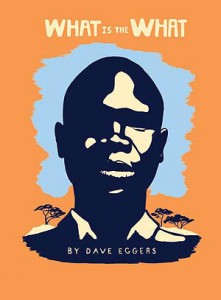 The novel tells the story of Valentino Archak Deng’s life, (note: he is a real person) from the years before Sudan’s civil war reached the southern region where he lived – which were prosperous and happy, to his experiences after he fled his village and left his family (whom he believed were dead) to seek refuge in Ethiopia and Kenya, before being chosen to be resettled in America.

What is the What is a novel, because Eggers was forced to reconstruct scenes based on Deng’s memory of events that began when he was only 7 years old when he fled his home in the Sudan and became one of the Lost Boys. The book flips back and forth between Deng’s present life (at 27) and his childhood. Having to go back 20 years, Deng couldn’t remember all the details that would have been necessary to write the book as is. But don’t let the novel status fool you, What is the What is a true story. I have a lot of faith in Eggers as a writer, so I’m confident that the events described are as close as can be to the real events experienced by Deng.

I learned a lot about African history and the civil wars and conflicts that have plagued the continent in my J620 international communication class, but I still wouldn’t say I’m well informed. Reading What is the What solidified my opinion that the majority of conflicts are incredibly complex politically, economically, and socially, which few clear cut solutions.

The writing is clear cut and easy to understand, because Eggers does a really good job at explaining complex situations in a concise and comprehendible way. The sheer volume of death and violence witnessed by Deng and the other children of southern Sudan is rattling and reading this book has certainly made me want to find out more about what the current situation is in Sudan.